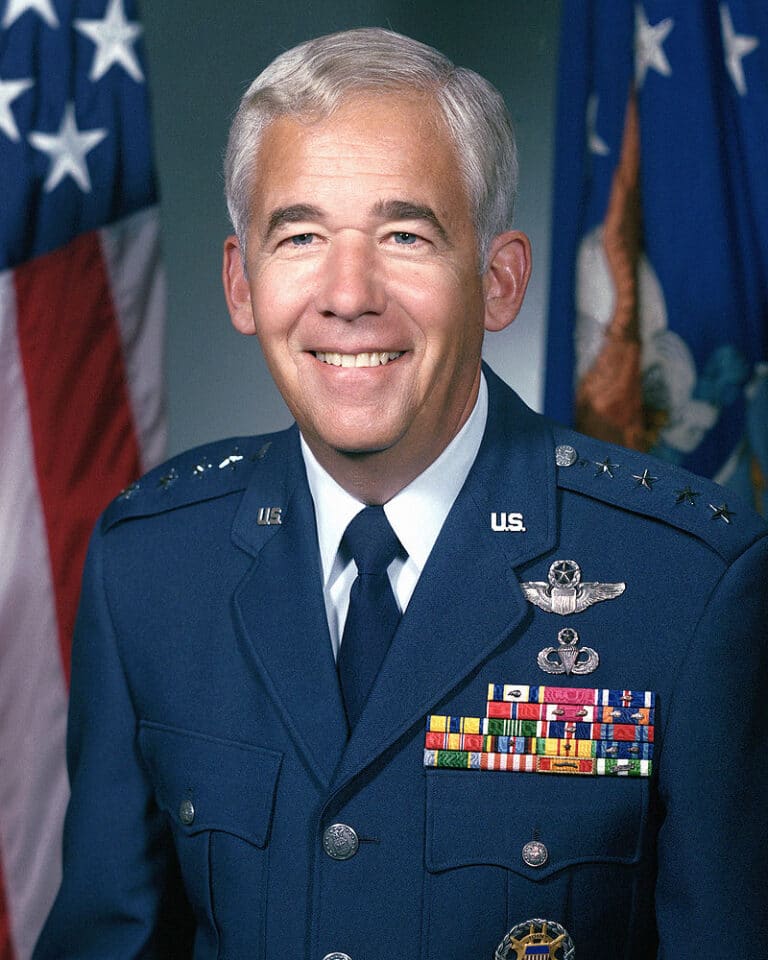 A great leader and our dear family friend, Four-Star Air Force General John T. (Jack) Chain died peacefully in his sleep this month at the age of 86. All who knew Jack mourn his loss and are grateful for the time he had with us.

Jack and his dear wife Judie were neighbors of Bob and June not long ago in the Vail Valley of Colorado. We shared many wonderful hours with them at dinners, parties, and on the golf courses and ski slopes.

Once Gregg and Bob learned about Jack’s extraordinary leadership in the U.S. Air Force, we interviewed him for our book Triple Crown Leadership: Building Excellent, Ethical and Enduring Organizations. Jack personified many of the traits of great leaders—especially the ability to flex between the hard and soft edges of leadership (what we called “steel” and “velvet”) depending on the situation and the people involved.

Jack’s final command was as Commander-in-Chief of the Strategic Air Command (SAC). SAC was responsible for America’s land-based strategic bombers and nuclear, intercontinental ballistic missiles. Here are some excerpts of our interview with him:

Chain: The day after I was sworn in, I invited all the officers and senior sergeants on the base in for a beer, told them who I was, my background, what I expected from them, and what they could expect from me. Then I went out to all 52 bases in the world, with 132,000 people, to introduce myself. They hadn’t seen a Commander-in-Chief in a long time. It was just as important to see our airmen at the end of the Aleutian chain as it was to see the people at Barksdale Air Force Base in Louisiana. They were part of the team, and they all had to know that I cared about them.

I was their leader, but I knew that the best thing I could do was to get the team to sign up, agree with, and carry out enthusiastically what I wanted done, rather than just me ordering them. I had to sell ideas down the line because I wanted people to feel involved and proud of what they’re doing so that they’d put in extra hours, or anything else, to get the job done. They all had to know that I cared about them.

Chain: You had to take care of your people and care about them from your heart and soul. That can’t be ordered. You have to have that ingrained in you. If I am the squadron commander, and I’ve got 100 airmen, they’re my people, not mine to order around, but my people, who I care about. I’ve got to care about all of them. If they are screwing up, I have to discipline them, but I still have to love them. I have to know about their spouse and children, how they are doing at home. I have to worry about all who work for me and be concerned whether they are taking care of the next level, and the next level, all the way down.

Chain: The Air Force has a standard that does not tolerate violation of moral well-being. There’s zero tolerance for alcohol abuse and sexual misconduct. When I was a captain and an aide to a general, who had a tendency to drink too much, I allowed him two drinks. After his second drink, I’d intercept the waiter and say, “Bring him a glass of water.” When the waiter delivered the water, the general would glare at me…. I was chewed out. Fine, I didn’t mind being chewed out because I knew the next day he would not say anything, and he knew what I was doing. I was keeping him from being embarrassed by doing something dumb in front of other people.

But I had been sworn in to “do the right thing.” I knew deep down that the Army candidate was the better one and had earned the promotion. It was a dilemma for me. However, given the facts, I had to vote for the Army candidate.

Jack’s years of service in the Air Force were exemplary. He had over 5,000 hours of flying time in 50 different aircraft, an amazing number. Jack served two tours in Vietnam with over 400 combat hours flown. He was a master parachutist with 66 jumps. Among assignments at many duty stations around the world, Jack served as Military Assistant to the Secretary of the Air Force, Director of the Bureau of Politico Military Affairs for the Department of State, and Chief of Staff for Supreme Headquarters, Allied Powers in Europe (NATO).

Jack’s military decorations and awards from the U.S. and Vietnam include include Distinguished Service Medals, the Legion of Merit, the Distinguished Flying Cross, the Gallantry Cross, and Bronze Stars among scores of other medals including many Oak Leaf clusters, combat ribbons, service stars, excellence awards, and more.

After Jack’s retirement from the Air Force, he signed a contract to be Executive Vice President of Burlington Northern Railroad. When approached later to become CEO of a large, prestigious firm where his skill set was a great fit, he declined because he had signed a five-year contract with Burlington. “A contract is a contract,” he explained.

In his years after the Air Force, Jack also served as an executive or board member of Quarterdeck Equity Partners, The Thomas Group, RJ Reynolds, ConAgra Foods, Kemper Insurance, and Northrop Grumman.

Jack Chain was unique, and he lived and led with unimpeachable integrity. Jack was also fearless. He was proud that in all his years of flying fighters in training or combat he never lost a battle (although he reluctantly admitted that in training once he tied with an instructor).

Bob remembers skiing with Jack at Vail, where he was always well ahead of Bob after barreling down black-diamond slopes. Then, he would wait patiently for Bob to catch up before skiing off again. Once, caught in a whiteout snowstorm on top of Vail mountain, Bob asked Jack if they could take the gondola down the mountain to avoid skiing virtually blind. Jack looked shocked, but finally agreed. He was fearless, but a great friend too.

Our world has lost a great leader and exemplary human being. We have lost a dear friend who inspired us and brought much joy into our lives. Rest in Peace, General. You’ve earned it.

Bob Vanourek and Gregg Vanourek are leadership practitioners, teachers, trainers, and award-winning authors. They are co-authors of Triple Crown Leadership: Building Excellent, Ethical, and Enduring Organizations, a winner of the International Book Awards, and called “the best book on leadership since Good to Great.” Take their Leadership Derailers Assessment or sign up for their newsletter. If you found value in this, please forward it to a friend. Every little bit helps! June Vanourek (wife and mother) has been active in her communities with philanthropy, volunteering, and mentoring, and is former board chair of Betty Ford Alpine Gardens.