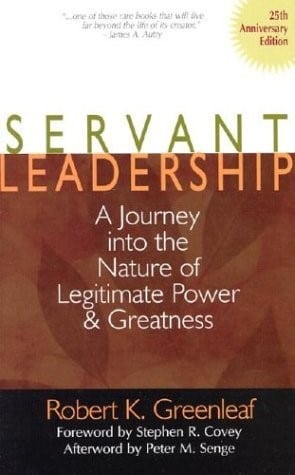 The concept of leaders as servants goes back into ancient history but was articulated most clearly in the 20th century by Robert Greenleaf in an essay, “The Servant as Leader,” published in 1970.

Bob joined the chorus in 1995, when he contributed a chapter on “Servant Leadership and the Future” in a book edited by Larry Spears called Reflections on Leadership: How Robert K. Greenleaf’s Theory of Servant-Leadership Influenced Today’s Top Management Thinkers.

The concept of servant leadership has greatly influenced us and many other students of leadership over the years.

Its impact is still going strong.

Just last month, Bob wrote and conducted a workshop on Servant Leadership, sponsored by SteamMaster, for Vail Valley leaders from all walks of life. (For a review of key points, check out this highlights reel on YouTube.) According to a SteamMaster press release, “Local business leaders found the training to be “inspiring, motivating and re-invigorating.”

Last week, Bob published an article in CoBiz Magazine, where he shared the impact servant leadership has had on him and explored the paradoxical and powerful insight that a leader only has power to the extent that their followers give it to them. In that article, he also provides several immediately-implementable tips to introduce the power of servant leadership in your organization.

In addition to the resources highlighted above, we have compiled a list of some of our favorite Servant Leadership Quotes on our website’s Resources page.

Check it out to be inspired.

Bob Vanourek and Gregg Vanourek, father and son, are co-authors of and speakers on Triple Crown Leadership: Building Excellent, Ethical, and Enduring Organizations, a winner of the International Book Awards. To get Gregg’s manifesto on Leadership Derailers (and how to avoid them) and free book chapters from Gregg’s books, including Triple Crown Leadership, check out his Free Guide.