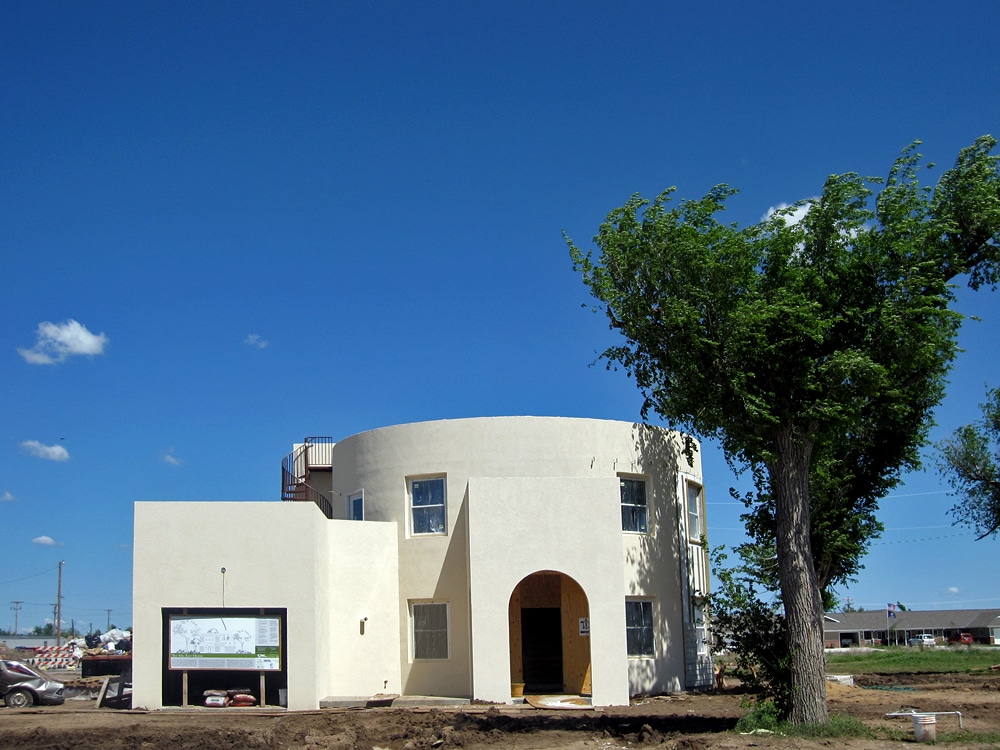 A few years ago, a devastating tornado destroyed Greensburg, a small town in Kansas. Remarkably, the town bounced back and created a model for the world for building a “green community.” One national expert called it “the greenest city in America.” For our book, Triple Crown Leadership, we interviewed one of the leaders of the initiative, Daniel Wallach (founder and executive director of Greensburg GreenTown). Here are excerpts of that interview.

What led you to your current work at Greensburg GreenTown?

Daniel Wallach: A series of severe tornadoes hit this part of Kansas. Greensburg, which is 35 miles south of where I live, was destroyed. Over 90 percent of the town was wiped out, nine people died, and everybody was essentially displaced. These were new breeds of tornadoes, some of the first to be seen with open vortexes like hurricanes. That night it was an 85-mile storm track with 22 tornadoes. The one that hit Greensburg was 1.7 miles wide. Ferocious storms. When our electricity came back on the next day, we saw what had happened to Greensburg and wondered how we could be of service in their rebuilding.

So I took a concept paper for rebuilding green to the first town meeting, which was exactly a week following the storm. It was remarkable that there were over 500 people at this meeting in a town of about 1,500. It showed to me that there was a whole lot of spirit in this town. I also learned that day that the Mayor was talking about rebuilding green, and somebody from the Governor’s office had the idea too. It seemed like a very good constellation of events and people to make this concept viable.

How did you begin the process?

Wallach: It was all about relationship building and listening. Of course, everybody resists new ideas to some degree, but especially after trauma. After trauma, all you want is a sense of familiarity back. You don’t want to be thinking about brand new ways of doing things. It was about demystifying what green was or could be, while listening to their objections. It’s working together. It’s listening and teaching each other in order to get this ultimate vision that you craft together.

What was the vision?

Wallach: For us, “green” is all about community. All the material elements of a green community—the LEED-certified buildings, the alternate transportation—are a byproduct of something much deeper: community. It’s about relationships; it’s about people caring about their surroundings. That includes their natural environment and their personal relationships. The tornado was very much a bonding agent to the community. I think human beings are designed to pull together in a crisis. For me, it was being sensitive to that, participating in that, and encouraging that. It was pointing out that they could give the world a gift by modeling that in the recovery.

How much resistance did you encounter?

Wallach: Very little, but I think everybody had some concerns. My strategy was to involve the natural leaders in town, some of whom were in political positions and some of whom weren’t—just the real natural leaders. You involve leaders, communicate with them, listen to their concerns, and engage them so that they are part of crafting it. With everybody I talked to, I said, “Who else should I be talking to? Who’s most respected in this community?” It was about depoliticizing the issue.

What were some of the keys early on?

Wallach: Building relationships with people, getting to know people, being as open and authentic as I could be. I never tried to be someone I wasn’t. That is really important because I am very different in a lot of ways from the people who come from here. I never pretended I was anybody else. In fact, that was part of my value: I had no baggage in the town, so I hadn’t been identified with any faction. There were a lot of outsiders coming in to the community—government agencies and potential funders—and I could serve as kind of a liaison. I talked very openly about my strategies and motivation, just disarming people with honesty.

None of this would be happening if we didn’t have this incredible teamwork. Nobody gets the credit. It’s got to be spread amongst the whole team. It’s phenomenal to be part of a community where about thirty different leaders at all levels—the county, the city, the hospital, the school, on and on—came together and took their piece. That took every one of these leaders getting on board in their own way and putting aside their egos in order to do this as a team. To me, that is the most remarkable story about Greensburg.

I literally can’t think of a project that’s going on in town that doesn’t have some element of the green initiative woven into it. And that’s because the community decided that this was our common vision, and everybody was going to work together to achieve this greatest good for the community.

What was the role of Greensburg GreenTown in the effort?

Wallach: Greensburg GreenTown is a classic, grassroots nonprofit organization. As a nonprofit, we could help bring in funding. We could be a mission-driven organization focused on one thing: building this model green community. No other entity would be able to do that. That was essential. In a nonprofit, you are looked to for your values.

What do you look for when selecting new people for the organization?

Wallach: People who are naturally curious, bright, and passionate about life. They’re hungry for new learning. That’s who I like to be around: people who love to work, who love to learn, and who love people. I find people who are very self-motivated. My favorite people are those whom I have to tell to slow down. I’ve been lucky enough to find those people. I used to assume that everybody had the capacity to self-govern, but that’s not how it is. I’ve had people who were painful to work with. You had to tell them everything to do. It was such a waste.

What did you do with those people?

Wallach: They evolved out of the organization.

Does emotional intelligence factor in?

Wallach: Yes, emotional intelligence is the most important and most underrated skill set.

Wallach: I think the crisis we’re experiencing in the corporate world is all about lack of character and emotional intelligence. We had better hold those values up high, or we’re just going to go through it again.

I use the word love, but it’s so loaded it loses its meaning. Leadership often operates utilizing fear as its tool, but that is completely unsustainable and unproductive. It will give you short-term results, but there’s always a long-term downside.

How do you approach leadership?

At the spiritual level, which I believe everything grows out of, whether or not you’re religious, we’re moved by our hearts. The better we know our hearts and what motivates us, everything else falls into place, naturally.

Are there larger lessons here?

Wallach: Balance is what “green,” or sustainability, is all about. I can’t remember who said it, but ours is one of the first generations of humanity whose problem has not been scarcity but overabundance. Too many choices. We’re overwhelmed. We’ve been programmed from the beginning of mankind for survival and scraping by, but now we have to learn to pare down. We have to learn to keep saying no. One of the metaphors for me is a buffet: we stand at the most abundant buffet that humanity has ever stood before. The danger is not getting too little food; it’s overeating. And it’s eating out of balance. If we don’t have a balanced diet, we’re not going to have long-term sustainable health. The most important thing we can model as leaders is balance.

What does it feel like to do this kind of work?

Wallach: It’s exquisite to wake up every day. Nature gives us appetite. And if we listen to our appetite, that’s the most effective compass. I’ve done that in my work consistently. I’ve taken a lot of risks. But I trust my appetite. I keep following my heart. Daily, my appetite is thoroughly quenched—and beyond. It’s just astonishing to me how good it feels.