The Role of Values for Leaders & Organizations 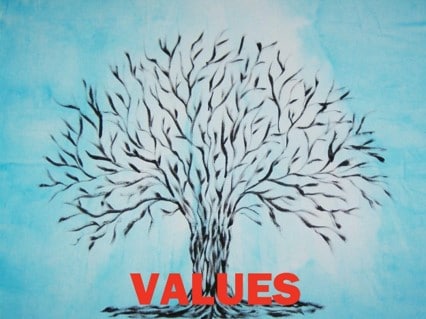 Our colleague in leadership, Harvey Kaufman, edited down one of his longer pieces on alignment so that we might share some of his wisdom and insight here.

A few years ago, I attended a Corporate Social Responsibility conference.  As you might expect (although I didn’t) a major focus of the conference was how to market social responsibility efforts to attract business.  The case for simply “doing good” as a reflection of an organization’s core values was absent from our discussions.  This made me think about the role of values in organizations and why it is important for companies to practice their values in day-to-day interactions with employees and customers.

While there were companies who employed them effectively earlier, core values emerged as an organizational mainstay in the 1970s.  They followed the social protests of the 60s, Watergate, the discovery of illegal campaign contributions, widespread bribing of foreign officials by American corporations trying to secure defense contracts, and allegations that multinational corporations were selling sub-standard products in the third world.  As a response to what was viewed as a lack of ethics in American business, values gained in prominence.  Unfortunately, while the popularity of having core values has increased, their relevance in organizational life seems to have diminished.  Too few organizations see their values as an integral part of their success, either in day-to-day operations or longer-term strategy.

Values Play a Key Role in Many Areas

Consider some of the areas in which values play a key role:

While values are a true reflection of the best leadership has to offer, and can last a very long time, they are not immutable.  Industries and societies evolve and organizations may need to re-evaluate their values.  Whatever changes are made to the values at these transition points, they must still accurately reflect the actual explicit behaviors favored by the organization to achieve success ethically.  In my experience, when leadership teams embark on such a course of honest self-exploration, it is their behaviors, and not the core values, that are most likely to change.