The World Cup and Great Leadership

Posted on June 26, 2014 by triplecrownleadership 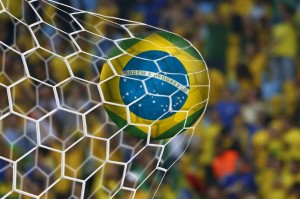 Watching the great performances at the 2014 F.I.F.A. World Cup in Brazil, we noticed many parallels between football (soccer) and great leadership. Competing at the World Cup and employing great leadership both take:

Patience. The game is long and can sometimes appear uneventful to the untrained eye, but then there are spurts of breakaway brilliance and intensity with tackles, moves, sprints, crosses, shots, and saves. Great leadership is willing to grind out tasks over the long term, ready for bursts of activity when opportunities arise.

Stamina. The heat and humidity in Brazil wear down the best performers. Similarly, the pressures of leadership require one to stay the course and not give up.

“You will go through tough times, it’s about getting through them.”

Hard Work. It takes years of preparation to be a World Cup contender. Those who aspire to lead well need to pay their dues and learn from years of experience.

“Success is no accident. It is hard work, perseverance, learning, studying, sacrifice and most of all, love of what you are doing or learning to do.”

Practice. Soccer stars may have natural athletic abilities, but their peak performance emerges only after tens of thousands of hours of practice on the pitch. There are no shortcuts in great leadership either. Some may be born with natural leadership skills, but great leadership is learned and developed over time mostly through experience and practice.

Learning from Mistakes. After making mistakes, players must get their head back in the game and move on. Leaders are human. They make mistakes, but they don’t dwell on them. Great leadership is a venture into the unknown. You learn fast, and move forward. You must be willing to make mistakes—and learn from them.

“Failure happens all the time. It happens every day in practice. What makes you better is how you react to it.”

Playing by the Rules. Competitors respect the rules of the game. The worst infractions result in a red card and penalize the team in the current and next match. For example, Luis Suarez of Uruguay is being investigated for allegedly biting an Italian opponent during the World Cup, and the repercussions could be long-lasting for him, his career, and his squad. In the workplace, ethical shortcuts might avoid detection in leadership for awhile, but likely will be discovered and hurt you badly.

Exploiting Small Differences. In soccer, small differences can lead to winning results. At the World Cup, all the contenders play at high levels. What determines the ultimate champion? Small differences get magnified over the course of a long tournament. The same is true in the workplace.

Teamwork. World Cup soccer requires exceptional teamwork. Even the best players can’t win games on their own, without great teammates, goalkeepers, and coaches. So it is with great leadership that unleashes other leaders to be the best they can be. Great leadership is a group performance, not a solo act.

“I am a member of a team, and I rely on the team, I defer to it and sacrifice for it, because the team, not the individual, is the ultimate champion.”

Playing Your Position. Being in the right place at the right time is critical in soccer. U.S. captain Clint Dempsey was in front of the net in the World Cup match against Portugal when the ball landed in front of him. He used his body to deflect it into the net. Great leaders play their positions until an opportunity to make a difference presents itself.

Trust. Players on the best teams trust each other implicitly, based on years of working hard together and relationships built on and off the pitch. They have bonded through years of preparation and sacrifice toward a common goal. This is as true in the office as it is on the field.

Guts. Clint Dempsey played game two with the broken nose he suffered in game one. That takes guts. True competitors, like great leaders, play through their pain.

“I learned a long time ago that there is something worse than missing the goal, and that’s not pulling the trigger.”

Respect. Great leaders and World Cup soccer players respect their competitors as well as the sport or industry in which they operate. Players often exchange shirts after a match, keeping remembrances of the intense competition that allowed both teams to rise to new levels of performance. Many players compete with and against each other, switching teams from year to year or playing on professional teams and then national teams, and they compete fiercely against each other on the pitch but also with great admiration and respect. Great leadership competes constructively, respecting competitors and treating them with dignity.

Vision. When little children play soccer they all chase the ball in a huge moving bunch, but mature players “see” the whole field and have a sense of the movement and “runs” that create opportunities and open space for an attack. And so it is with leaders, who must not only see clearly what is happening in the present but also have a sense of the big picture with industry and market shifts and trends.

Anticipation. Great players don’t just dribble and pass. They also make the right movements at the right time, opening up spaces on the field and anticipating several plays ahead, developing a sense of where the ball will be in the near future. They develop a keen sense for where teammates will be even without looking. And so it is with leaders and their team who develop a culture and shared values, giving them a sense of how to operate effectively together even under pressure.

Eye for the Net. At the end of the day, players must score more points than their opponents, and the best players have an “eye for the net.” They know where to place the ball even as they are being charged by tough defenders and being opposed by big and strong goalkeepers in front of a small goal. They know when and where to attack, and where exactly to place their shots. In business, windows of opportunity are small and ever-shifting, and leaders must be nimble and precise with their efforts.

“I’m here to score a lot of goals. It’s my speciality, that’s what I’ve been brought here to do, and I want to score plenty.”

KISS (“Keep It Simple, Stupid”). Soccer matches often come down to fundamentals: how well all the players do under pressure and despite exhaustion with passing, dribbling, defending, running, shooting, corner kicks, free kicks, placement, communication, and more. Many games are won because of mistakes made by opponents in front of their own net or even in midfield where a quick counterattack can be mounted. Sometimes leaders get caught up in fancy strategies and spreadsheets, but it’s the day-to-day execution and operations (and attendant communication) that often win or lose market battles.

“Football is simple but the hardest thing to do is play simple football.”

Playing Your Game. The best teams know their own strengths and weaknesses and develop a game plan to maximize their own strengths while exploiting the weaknesses of their opponents. But even the best teams can fold when thrown off their game plan due to pressure defense or an attacking opponent. In organizations, we win through combinations of business models, strategies, management, and culture that allow us to do what we do best.

“If a team wants to intimidate you physically and you let them, they’ve won.”

Extra Effort. With big fields and 90 minutes of regulation play (not to mention potential overtime), soccer players cover a lot of ground. Through the first two World Cup games, Marcelo Diaz of Chile ran the greatest distance of any player: about 25 kilometers (nearly 16 miles). In the heat and humidity of Brazil, many players fade, so it is the extra effort that can make the difference between victory and defeat. In business, as in the World Cup, sometimes the little things done to play tight defense or set up a play downfield make all the difference.

“The vision of a champion is someone bent over, drenched in sweat, to a point of exhaustion, when no one else is watching.”

Fire Within. Great leaders and great athletes find a deeper motivation that allows them to tap into remarkable and almost limitless sources of energy and motivation. They have a deeper purpose and a grand vision motivating them to sustained high performance through great sacrifice and discipline.

“Somewhere behind the athlete you’ve become and the hours of practices and the coaches who have pushed you… is a little girl who fell in love with the game and never looked back. Play for her.”

World Cup soccer and great leadership have much in common. What other parallels can you add?