Posted on October 22, 2012 by triplecrownleadership 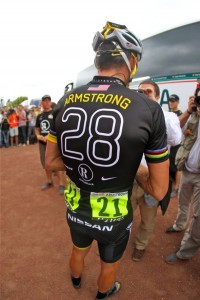 Lance Armstrong was “gaming the system”–exploiting the rules for personal gain.

This is so disappointing because Armstrong was one of the most celebrated athletes in the world, with seven consecutive Tour de France championships. Armstrong is also a celebrity cancer survivor and philanthropist. He established the influential Livestrong Foundation, with its popular yellow bracelets, “changing the way the world fights cancer.” The Foundation has raised over $500 million since inception. Good work, indeed.

The U.S. Anti-Doping Agency published a 202-page report, detailing overwhelming evidence that Armstrong was doping and encouraging others to dope.

Armstrong denies the report’s allegations, but Bill Strickland, editor-at-large of Bicycling magazine, noted that Armstrong “industrialized” doping within his team: “He definitely led the charge to dope … he was a team leader.”

Strickland concludes, “As with most crimes, criminals are ahead of the enforcement … it takes months … maybe years, to develop one test … the doctor, takes about an hour to figure out how to get around it.” [Source: NPR.]

Armstrong gamed the system, staying ahead of the tests with expert help, duping his supporters and sponsors, perhaps even himself that, “Everybody’s doing it. We have to keep pace.”

Worst of all, Armstrong is doubling down on deception, still cycling further and faster from the truth. To so many of us who have admired him, this was “the unkindest cut of all.”

For Brutus, as you know, was Caesar’s angel.
Judge, O you gods, how dearly Caesar lov’d him!
This was the most unkindest cut of all.
-William Shakespeare, in Julius Caesar

Bob and Gregg Vanourek are authors of Triple Crown Leadership: Building Excellent, Ethical, and Enduring Organizations, based on interviews with leaders in 61 organizations in 11 countries.
Twitter: @TripleCrownLead
Facebook: http://www.facebook.com/TripleCrownLeadership